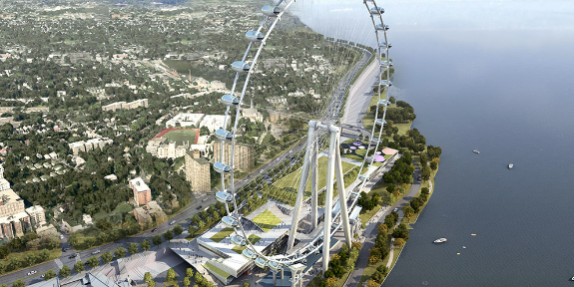 Although the New York Wheel, the massive ferris wheel coming to the Staten Island waterfront, is all but a given at this point, the project still needed City Council approval before moving forward with construction. And as of yesterday, those changes—which focused mainly on a parking garage near the attraction—were approved.

The adjustments centered on the parking garage adjacent to the Wheel, which was originally proposed as a three-level structure; the plan that got City Council approval would instead create a four-level garage and reduce its overall footprint. It will also “[allow] for additional benefits to utilize natural instead of mechanic ventilation and creating more self-parking as requested by the community,” according to a press release.

The owners of the Wheel have also partnered with EarthCam to launch a livestream of construction at the site, showing the view from the nearby Robbins Reef Lighthouse in St. George. The video isn’t embeddable, but if you’re curious, you can check it out via the New York Wheel’s website. (Spoiler: It’s a big hole and a few cranes right now.)